The goal of the Rare Fish Rare Beer Project is to partner with conservation-minded breweries to develop innovative, highly local, limited-release craft beers that focus on native fish within their home watersheds.  With these rare beers, we seek to educate craft beer drinkers about the diverse challenges facing these native fish species while simultaneously raising money for projects that benefit their preservation.

The Trucha Grande story begins with high altitude snow flakes tagging powder faces and ends with the finest barley grown locally in the San Luis Valley. In the middle, there dwells a magnificent fish who has called the Rio Grande River home for eons. “Trucha Grande” is a reflection of the Rio Grande, both as a river in its natural wonder and also as a life-source feeding and sustaining our way of life. Through the collaborative efforts of Three Barrel Brewing Company, Colorado Malting Company, Laws Whiskey House, and Running Rivers, Trucha Grande was created to support the Rio Grande Cutthroat and to tell a real Colorado story. This magnificent fish resides in only our most pristine mountain lakes and streams.
​
Hanging on to just 10% of its historic habitat, this treasure should be cherished and protected by all.
Volume 2:  Bring the Greenback (a partnership with Baere Brewing Company)

This limited-release table sour celebrates the rebirth of a rare Colorado native, the Greenback cutthroat trout.  Until recently, the true Greenback could only be found in a single watershed, Bear Creek outside of Colorado Springs, CO.  However, aggressive recovery efforts are currently underway to put our state fish back into its native waters within the headwaters of the South Platte.  Lift your glass, and toast the hard work being done to Bring the Greenback!
​
This beer was quick soured with Baere Brewing Company’s house lactobacillus culture and fermented in stainless with a mixed culture of yeast and bacteria. It was aged on simcoe hops and emergent green spruce tips foraged from the banks of Bear Creek, outside of Colorado Springs, CO.

The story behind Bring the Greenback was recently featured on an awesome PBS documentary on the South Platte Watershed!!!
Whiskey Volume 1:  Nativa (a partnership with Laws Whiskey House)

This proper Rye whiskey was bottled to celebrate the Centennial state’s only native trout species, the cutthroat trout.  Laws Whiskey House and Running Rivers, in support of our fellow fishy Coloradans, have teamed up to bring you this limited edition offering of Secale Nativa.  Made exclusively with local San Luis Valley grain, pristine Colorado water and plenty of artisan pride, a portion of the proceeds from this special release funds conservation projects for our native trout.

“Nestled in depths of the Drfitless Region of Northeastern Iowas are dozens of spring-fed streams that trout have called home for centuries.  You read that right, native trout in Iowa!

This limited-release Berlinerweisse is infused with pomegranate and blood orange to celebrate Iowa’s only native trout: the South Pine Brook Trout.  Since this uniquely Iowa strain of brook trout was discovered in South Pine Creek in Winneshiek County, the population has been used in native brook trout reintroductions in other Iowa streams.”

Volume 4:  Colorado Cuttie (a partnership with Casey Brewing and Blending)

Casey Brewing and Blending has hit this one out of the park with its honey ale aged in oak barrels with peaches and nectarines.  Do yourself a favor and find one of these beers!

As with the original Trucha Grande, proceeds from this beer will be put to work on-the-ground to benefit the San Luis Valley native Rio Grande cutthroat trout.

(No fish were injured in the brewing of this beer.)  (Including that Rio Grande cutthroat that the bear has the death grip on in the label.)  (He totally let that fish go.)  (As should you, whenever you are fortunate to catch this majestic trout!)

Every autumn across Iowa's Driftless region, brook and brown trout work tirelessly to create and guard their redds (spawning beds).  It's important these areas not be disturbed, as wading through a single redd can crush hundreds of eggs.  The survival of Iowa's trout depends on the responsibility of anglers.  The next time you're on the stream (enjoying this fish, flavorful coffee oatmeal stout), take your time to read the water, move slowly, and most importantly, Wade Wisely. 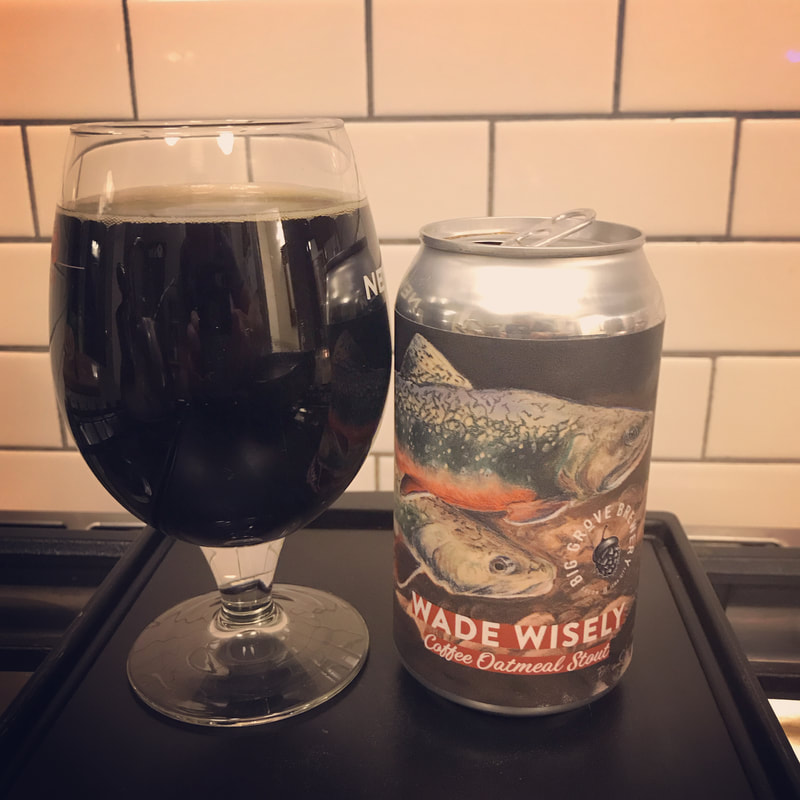 Wade Wisely is the 6th volume of the Rare Fish Rare Beer Project, brewed in collaboration with JBC Coffee Roasters and the Driftless Flyathlon. The Driftless Flyathlon aims to raise awareness of conservation of Iowa’s coldwater trout streams through recreation. Proceeds from the sale of this beer will go towards projects that help educate the public and improve the overall quality of and access to Iowa’s trout streams.  Due to it's popularity, Wade Wisely was brewed again in 2020 to raise more awareness and money for brook trout!

Every autumn across Iowa’s Driftless Region brook and brown trout work tirelessly to create and guard their redds. Redds are bowl-shaped depressions of bright, cleaned-off gravel surrounded by darker, dirtier rock on the stream bed. Delicate trout eggs are deposited and fertilized on these redds and will remain there until they develop into fry (small trout). It’s important redds not be disturbed--wading through a single redd can crush hundreds of eggs that could one day develop into adult trout.

The survival of Iowa’s trout depends on the responsibility of anglers. The next time you’re on the stream (enjoying this rich, flavorful coffee oatmeal stout), take your time to read the water, move slow, and most importantly, Wade Wisely.
Volume 7:  Forellen (a partnership with Ursula Brewing, Joy Wine and Spirits, and Propagate Lab)

Like the pilsner, the brown trout (forelle in German) was first introduced to the United States in the late 19th century by European immigrants.  Proceeds from this experimental pilsner will go towards projects benefitting the brown trout's Colorado-native cousins (and Colorado's official state fish), the Greenback cutthroat trout. 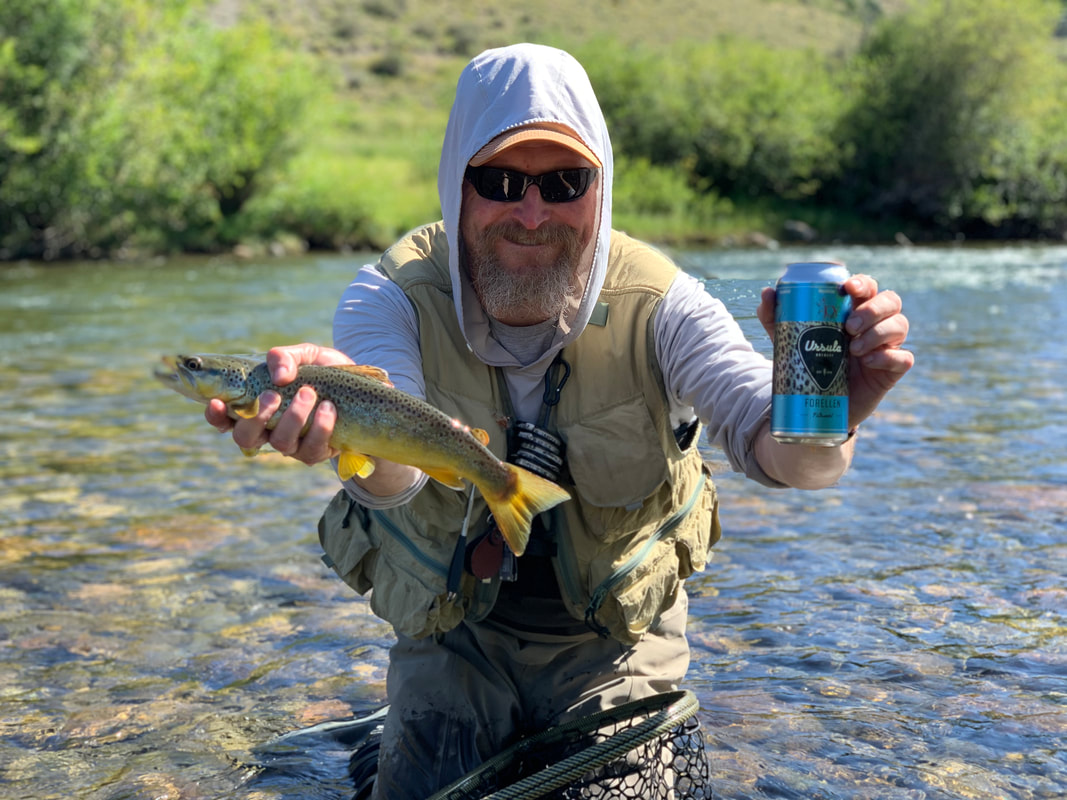 We have several new beers in the works, in Colorado and beyond.  Stay tuned.

In the meantime, if you are a conservation-minded brewery / distillery who is interested in making a difference for the native fish in your watershed, please contact me ASAP.

A few stories about The Rare Fish Rare Beer Project… 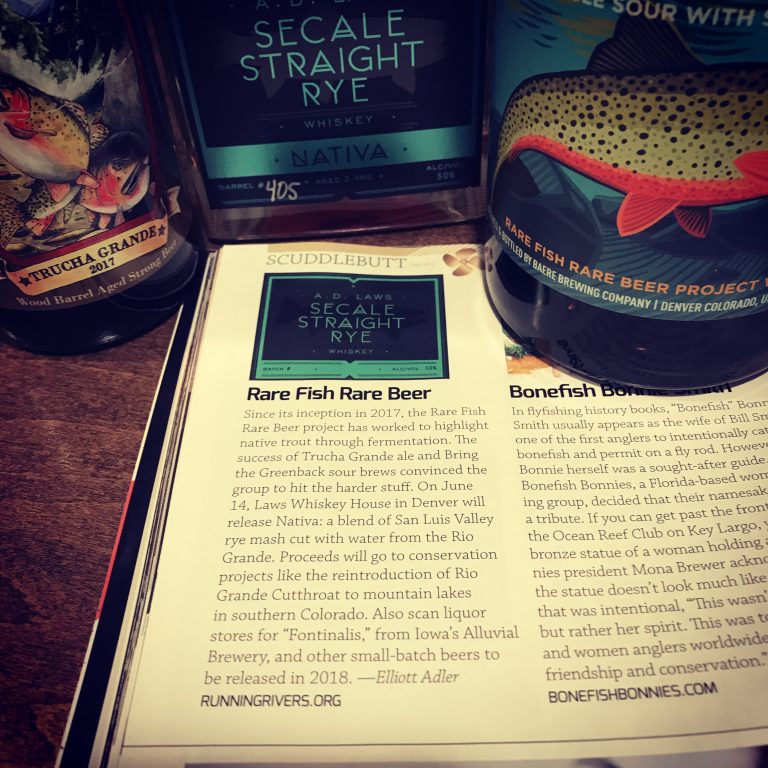