Over the years, we have had a lot of interest in the Flyathlon and the great things that we are accomplishing with this unique program.  Here is a sampling of what has been said about it: 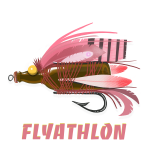 There are a lot of serious problems in this world, but the solutions don’t always have to be serious. Fly-fisherman and trail-runner Andrew Todd channeled his concern for Colorado’s native trout and the watersheds that support them into the creation of a joyful, irreverent, event: The Flyathlon.” – The Dirtbag Diaries, Episode 117.

"When two of the three disciplines typically count as leisure activities, you know you’ve chosen your Centennial State race wisely. The Rocky Mountain Flyathlon combines trail running, fly-fishing, and beer swilling to create one of the more enjoyable “triathlons” you’ll ever experience. The premise? Participants run the course with their angling gear, get their lines wet along the way, and knock back some delicious Colorado craft brews at the end. Finish times are adjusted according to the size of fish caught; in other words, the bigger the fish, the more minutes get shaved off your time. Per catch-and-release rules, the proof is in the photos: Racers must snap pics of their catches against the rulers printed on their race bibs before tossing them back. The event may have a tongue-in-cheek vibe, but there are certain aspects of the Flyathlon that organizers and participants take very seriously: inclusivity, responsible recreation, and fundraising for trail and river improvements (the majority of proceeds go toward river and trail conservation projects). But promoting good land stewardship doesn’t preclude fun, which organizers encourage just as freely." 26 Colorado Races You Should Start Training for Right Now, 5280 Magazine

“Adding fly fishing to trail running this summer gave me huge inspiration,” he said. “Having the motivation taken away to train for actual races, it gave me a ready source of adventure. Having new directions to go with fly fishing was a great boon, and I really enjoyed it.”  Bryon Powell, The Durango Herald, Troutman 100

“It’s never been easier to mix good beer with outdoor adventure. For proof, just look to the Rocky Mountain Flyathlon, a “triathlon” that involves trail running, fly-fishing and drinking craft beer. At the annual event in Saguache, Colorado, flyathletes run a 12.5-mile singletrack course, catch a trout in the Middle Creek along the way, and then drink a craft beer. Best time wins. (Times are adjusted for the size and species of fish caught).” –  Outside Online

The story behind Bring the Greenback was recently featured on an awesome PBS documentary on the South Platte Watershed!!! ​

Run. Fish. Beer.  How to "Win" the Driftless Area Flyathlon

"I’ve fished Colorado’s lakes, rivers and streams for many years. I’ve caught and released many trout, big trout, colorful, wild trout. These waters and these fish form a glimpse of the state’s environmental health. I am the recipient of the good health, mental and spiritual well-being that wild places and experiences instill in a person. So I’ll return to the Flyathlon. I’ll be an outdoor activist."  Tim Bergsten, Springs Media

“The traditional doctrine that fly fishing is a prohibitively expensive, elitist endeavor that requires mastery to be enjoyable, is disintegrating.  Instead, people are seeking out novel and approachable ways to just get out and fish.  With the Flyathlon, we have created a casual and fun race environment for newbies to take the leap to learn how to fish.  I think people appreciate that low-pressure opportunity.  Oh, and they seem to enjoy the copious flow of diverse Colorado craft beers…“- TROUT Magazine, Summer 2016

“Outdoor adventure doesn’t get much better than the Flyathlon, an “alternative triathlon” consisting of trail running, fly fishing, and craft beer“- Canadian Running

"Looks like I might have one more reason to actually get back into trail-running shape this season. What about you? Would you compete in the Flyathlon?"- Field and Stream

"But while many would be seeing dollar signs, Todd has other ideas. A fish biologist for the federal government, he spends every day working to study and protect the native fish species of Colorado. The Flyathlon has become an extension of this passion. Rather than profiting from the race, he encourages racers to crowdfund for conservation efforts – especially those benefitting the fish native to the race courses.“- Starternoise

“A triathlon by definition needs a third sport, and that’s where the beer comes in. Well, sort of. “My lawyer said you can’t make people drink during a competition,” says Todd, half-joking.“- Trail Runner Magazine

“It is a competitive event at heart, but the culture behind the Flyathlon revolves much more around enjoying the outdoors, catching some beautiful native cutthroat trout and drinking amazing craft beer.“- Gear Patrol

“If you’re out riding or hiking in the San Luis Valley this summer and you see a young girl aiming a BB gun at a less-than-desirable can of beer, fear not.  The people cheering her on are participants in the 3rd Annual Rocky Mountain Flyathlon- a running, fishing, and craft beer contest that raises money for trails and fish habitat. Colorado craft breweries provide event-themed beers, and craft whiskey always seems to turn up.” – Thirst Colorado

“I admit when I first heard about a Flyathlon is was perplexed, even confused. What was it? When I asked friends I was met with blank stares, the dictionary on my shelf shed no light, I felt like I was ten-years-old again looking for Waldo in one of those maddening books. Then I turned to my Google browser and the first entry it returned caught my eye—Flyathlon: run. fish. beer. Intrigued I dove in, what I found might earn the title of the best Rocky Mountain sport ever.”  –Elevation Outdoors Magazine
​
Click here to see an article written by Flyathlete #37, Steve Grace, in Spring 2015 edition of the inspirational, educational magazine for the dedicated fly fisher, The Drake. Steve Grace Article